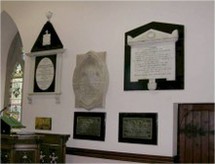 In the 17th century those lands given to the London Companies Merchant Taylors Guild, which became the Parish of Camus and Macosquin, were in turn sold to the Richardson family. The Somerset Estate of 18,159 acres was purchased for the sum of £7,424. The family occupied the estate Manor House at Somerset. This family were of exceptional and influential importance in the Parish for about 300 years. A collection of Memorial tablets mounted on the nave North wall records their existence and also their descendents the Torrens family.
A more extensive history of the Richardsons is available courtesy of Timothy Ferres at
http://lordbelmontinnorthernireland.blogspot.co.uk/search?q=somerset 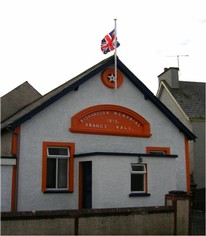 The Rev. Thomas Rumbold Richardson, third son of Henry Richardson, was instituted as Rector of the Parish on 23rd June 1821. During his ministry the Church was re-roofed in 1826 at a cost of £500, half of this amount being paid by the Rector, and the Tower built in 1827.