Skip to content
Sunday 22nd May 2022 9am Holy Communion 10.30am All Age Family Celebration

In the Churchyard directly behind and in line with the present day Church, the outline of what remains of the Abbey can clearly be seen. The remains of what was the North and South walls and the Eastern wall of the ancient building stands about three feet high. Also the North wall of the present Church is part of the North wall of the Abbey. On close inspection of the stonework it is most irregular and does not conform to any conventional stonework pattern. The outline of of what was originally two large windows are clearly visible , the edging being particularly evident. The South wall by comparison is completely different being of good quality stone, built in traditional stonework pattern. This was most likely carried out in a later rebuilding programme. The original Monastery wall is probably hidden behind the facing. The entrance door was at the West end, probably where the present interior doors leading to the nave are located. 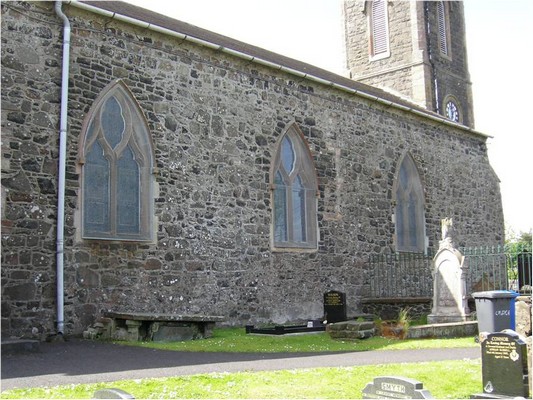 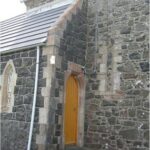 Some years ago a Quorn Stone or other decorative feature was dug up in the graveyard. It is most likely that this stone formed part of the old Monastery building. It is a beautifully sculptured stone depicting what appears to be a rose above what may be a spray of shamrocks, perhaps a crest of the Cistercian Order. Although much weather beaten it can be seen at the base of the Tower.
The bell tower believed to be a wooden structure with a wooden spire, was located at the west corner of the south wall. (see map of Camus and Macosquin) 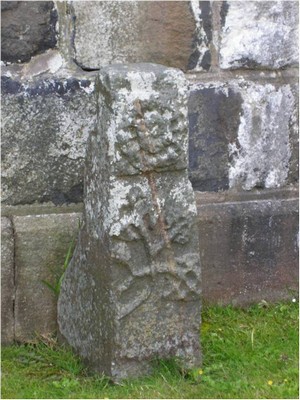